The Treasure Hunt is the eighth episode of the second season, and the 34rd episode overall, of the Jem animated series.

Richard Xanthos sponsors a literature-themed treasure hunt in which the winning team will get a priceless item from the Zanthos collection. Jem chaperones the Starlight Girls team which consists of Ashley, Krissie and Ba Nee, while Pizzazz chaperones three street urchins named Molly, Ellen and Sandra, that Eric paid off.

The Misfit Girls deliberately cheat by having Techrat feed them riddle answers through an earpiece and stealing the Starlight Girls' map. Somehow, the Starlight Girls must use their own wits and knowledge of classic books to reclaim the lead.

The Starlight Girls eventually manage to win the contest and Sandra joins them since Pizzazz abandoned her after she broke her ankle. In the end, even Ellen and Molly reform too.

Pizzazz: What an obnoxious little brat!
Eric: Reminds me of you, Pizzazz. 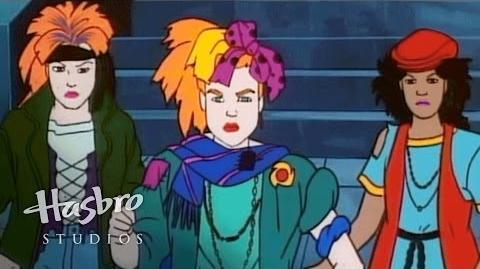 Retrieved from "https://jem.fandom.com/wiki/The_Treasure_Hunt?oldid=32077"
Community content is available under CC-BY-SA unless otherwise noted.