The Stingers Hit Town (Part 1) is the first episode of the third season, and the 54th episode overall, of the Jem animated series.

Eric Raymond gets fed up with The Misfits' childish behavior, so he sells everything he owns and buys Misfits Music from Harvey Gabor. He decides to offer a recording contract to a new foreign band called The Stingers. He offers to let them stay at the Gabor Mansion, and when Pizzazz meets their lead singer, Riot, she falls madly in love with him. The other Misfits get deeply concerned about the way Riot and his bandmates take advantage of Pizzazz and think she needs to snap out of her infatuation and start acting like a Misfit again.

Jerrica also decides to offer the Stingers a recording contract, but Riot tells her that Jem is the only person capable to convince him to make his band join Starlight Music. 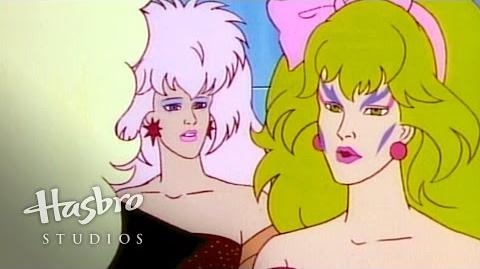 Retrieved from "https://jem.fandom.com/wiki/The_Stingers_Hit_Town_(Part_1)?oldid=32040"
Community content is available under CC-BY-SA unless otherwise noted.