For the IDW comics band, see The Stingers (comics). 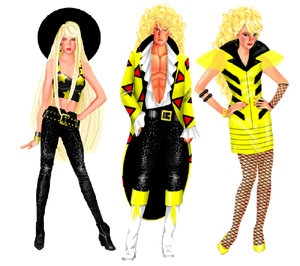 The Stingers is a glam rock band that originated in Germany. The band is composed by the handsome lead singer Riot, the flirtatious Minx, and the conniving Rapture.

The Stingers' origins take place in West Germany, where bandmates Riot and Minx left their former band called Nirvana. Riot decided to leave the band to make his own way in the music business. Minx joined him realizing that she would be better off with him. Rapture soon joined them and thus The Stingers were born.

They tried to find clubs that would let them perform, although they were turned down most of the times and were even forced to live on the streets, which they did for one whole winter, performing on the streets for money to eat. They worked their way to the top and eventually became a huge hit in Germany.

The Stingers were invited to perform at Le Klub Kool in America. Jerrica was informed by Lindsey Pierce that the "group just in from West Germany was looking into joining a United States record label". Jerrica and Kimber went to watch their show with the intention of getting them to sign onto Starlight Music. However, Eric was also aware of this new group and had his own plans to make them sign with Misfits Music.

At first, it seemed that the Stingers would in fact remain with Starlight Music, but Eric offered them half of his company, as well as renaming it to Stingers Sound. While Riot was ultimately more interested in pursuing Jem for his own romantic reasons, the contract offered by Eric proved to be more favorable to him, and he accepted it.

Riot is the lead singer of the Stingers, which he claims is the greatest rock band of the 20th century. He is charming but aloof and arrogant. He is confident with his looks, believing he is the perfect man. He commands respect and demands devotion from his bandmates and fans. He is aware of the power he has over people and uses it to get what he wants.

Minx is cunning, manipulative, and prides herself on being able to have her pick of anyone, only to toss them away once she gets bored, which happens with alarming regularity. She is also very technologically-minded and can work wonders with any computer or synthesizer.

Rapture is the guitarist of the group. She is a skilled con-artist and is quite knowledgeable in matters of the occult. She uses that knowledge to further her own agenda, and often that of the Stingers as well.. 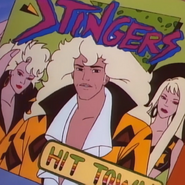 Rapture doll by Integrity Toys
Add a photo to this gallery
Retrieved from "https://jem.fandom.com/wiki/The_Stingers?oldid=32695"
Community content is available under CC-BY-SA unless otherwise noted.