The Princess and the Singer is the nineteenth episode of the first season, and the 19th episode overall, of the Jem animated series.

Loosely based on Mark Twain's story, The Prince and the Pauper, while touring the small European country of Morvania, Kimber meets Princess Adriana, the teenage heir to the throne, who happens to look exactly like her.

When Adriana escapes from her room at the castle, her power-hungry cousin, Lexa, sends her henchmen to track her down and bring her back. Kimber and Adriana bump into each other at the city's marketplace. In the confusion, Lexa's henchmen encounter Kimber (who they think is Adriana) and kidnap her instead. She is imprisoned in an old cell of the castle, constructed on a cliffside overlooking the ocean, from where she manages to escape by jumping all the way down from her cell's window into the turbulent waters.

Lexa discovers that the real Adriana is with the Holograms, so she uses the Misfits to lure Kimber to the hotel where the Holograms are staying and kidnaps her again, this time incarcerating her at the top of a tall tower.

She then sends Dimitrios, her conspiring partner, to plant a bomb on the stage where the Holograms will perform that night, to kill Adriana and take over the throne. Eric Raymond and the Misfits gatecrash the party and save the Holograms from the explosion. They then rescue Kimber, Lexa is placed under arrest for conspiracy and Adriana claims the title of crowned queen at last.

(After everyone is rushed off stage before the bomb goes off) 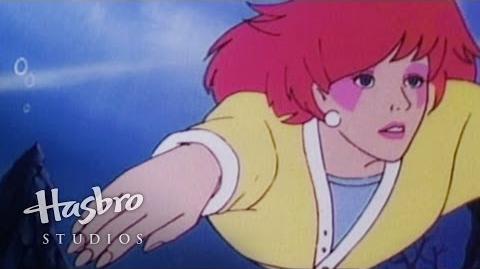 Jem and the Holograms - Kimber Escapes From the Castle 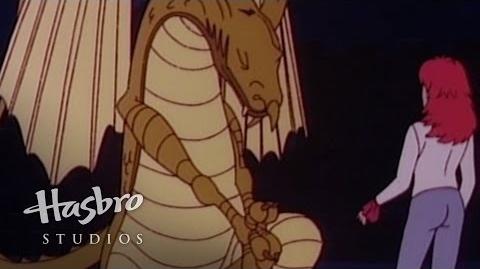 Retrieved from "https://jem.fandom.com/wiki/The_Princess_and_the_Singer?oldid=32028"
Community content is available under CC-BY-SA unless otherwise noted.