The Music Awards, Part 2 is the fourteenth episode of the first season, and the 14th episode overall, of the Jem animated series.

Just as all seems hopeless for Krissie, her new friend, Danny, saves her. As the concert ends, Deirdre suggests that Danny accompanies them, but he gets caught by a thug named Mick, who lets Danny, Dierdre, Krissie and Ba Nee stay one night in his bus, with the condition that Danny works to pay for the stolen tickets Mick was selling in the previous episode. The next day, The Holograms get to the mansion only to find out that there's a social worker named Jack Sobieski looking for Jerrica. He explains that he got a tip that three of her girls ran away. Jerrica doesn't know what to say, but Ashley saves them by saying that the girls are hanging out flyers for the benefit concert.

As Jerrica and the others continue their search for the girls, The Misfits stage a publicity stunt to garner more attention toward their appearance at the Music Awards. Jerrica projects a hologram of a giant bird, scaring Pizzazz out of her wits and causing her to fall into a pond. Just as Eric and Stormer help Pizzazz out of the water, Techrat mourns over the destruction of his laser gun, only to make an infuriated Pizzazz threaten to wreck him instead.

Meanwhile, Deirdre, Krissie, Ba Nee and Danny run afoul of a couple of thugs named Mick and Ramón, who force Danny to steal from Sounds ETC for them. They manage to escape and two policemen, named Jones and Rodriguez, are later directed to the Haven House (by a Best Hamburgers' employee named Tony), where Danse finds them and brings them to the concert.

Techrat tries to disrupt the concert with a jamming device, but Danny catches him in the act, forcing him to flee in a panic. Meanwhile, the Misfits win the Best Musical Group award and Pizzazz plans to gloat to Jem about it. They drive to the concert, only to find the audience cheering the performance. Pizzazz, silenced and shocked by the overwhelming sense of goodwill (the one thing she hates the most) the concert has created, doesn't notice her award accidentally slipping out of her hand to the floor, where it smashes into pieces.

Pizzazz: (accepting the music award) I'd like to thank the Awards people for having the good taste to give us this award which we so definitely deserve.

Techrat (to Pizzazz): Look what you've done! My beautiful laser. You wrecked it.
Pizzazz: (holding her fist up to Techrat) One more word and I'll wreck you!

Danny: I'm a guy. I can look after myself.
Krissie: But everybody needs help. Even a boy. You can't keep on running forever.

Danny: You must be three of the dumbest girls I ever met.
Krissie: Yeah, you can say that again. 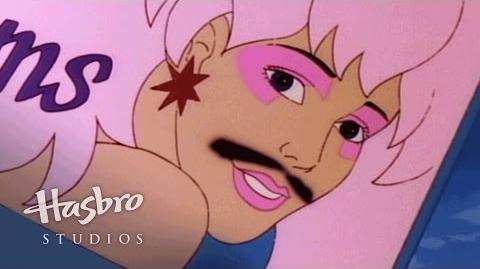 Retrieved from "https://jem.fandom.com/wiki/The_Music_Awards_(Part_2)?oldid=32027"
Community content is available under CC-BY-SA unless otherwise noted.