The Battle of the Bands

The Misfits is an American rock band born in Los Angeles, California, and rival to Jem and The Holograms.

Since its inception, the band's lineup has been comprised of members Pizzazz (main vocals, rhythm guitar and leader of the band), Roxy (lead guitar) and Stormer (keytar and lyricist). The fourth member is saxophonist Jetta, who joined the band later.[1] Their manager is former Starlight Music executive, Eric Raymond.

When Jerrica Benton first assumed control of Starlight Music following her father's death, one of her first problems arose from meeting with her then business partner, Eric Raymond. Eric explained his distaste for Jem and The Holograms, stating that the industry needed "fresh blood". It was at that point that he introduced her to The Misfits, who made their entrance by riding into the office riding atop motorbikes designed to look like electric guitars.

Since then, despite losing the Battle of the Bands and having to make their own way through the music industry, The Misfits have been a highly successful (although accident-prone) band, cutting their way through the much harder and edgier new wave music scene.

Despite their carefree —and often aggressive— personalities and apparent little concern for others (often putting people in dangerous situations, which apparently they just see as rather amusing circumstances they can take advantage of), there's a fine line The Misfits won't cross if they acknowledge other people's lives are in danger (such as when they risked their own lives to save The Holograms from a bomb planted on the stage they were going to perform).[2] Furthermore, should the situation require it, they may even be open to collaborate with others and put their differences aside, all in the sake of a common benefit.[3] In fact, in the last episode it is Pizzazz herself who takes the initiative and proposes Jem a truce between both bands.

In Season Three, a new band called The Stingers was introduced into the show, who from then onward would become the series' new main antagonists and with most of the remaining episodes focusing on them. As a result, The Misfits were relegated to being only recurrent troublemakers until the end of the series.

The Misfits are a mix of characters with varied personalities, but who generally follow the same brand of desire and deceit. The only possible exclusion to this is Stormer, who has on many occasions revealed to be of a much kinder and softer nature. 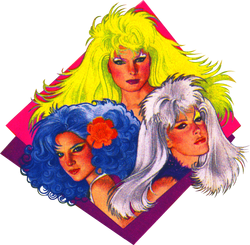 The Misfits are led by Pizzazz, an almost-entirely mean-spirited young woman whose desire to make it to the top of the charts and achieve fame and fortune makes it clear that, in her mind, there is only room for one victor, and that is The Misfits themselves.

Roxy is a mix of good and bad; sometimes Stormer gets her nice influence on her but Pizzazz comes along and Roxy is always there to support her plans.

Stormer is the youngest and most kind Misfit. She usually avoids showing this kinder side when around her bandmates. She plays keytar and writes the lyrics for The Misfits.

Jetta is a mythomaniac, meaning she loves to tell lies about her great lifestyle back home in England. She is a really selfish person and is the new addition to The Misfits, providing a great and new sound with her saxophone.

Clash is essentially just a groupie for The Misfits. While she has never been officially allowed in the band (much less ever performed with them), through constant begging she has frequently been led to believe that she had become a honorary member. As such, she usually carries on all sorts of chores and dirty works for them with the promise of one day being officially announced to be part of the band. Still, her only "musical talent" would be her tendency to clash the two tiny cymbals she wears on her wrists.

The musical style of The Misfits runs in complete opposite tangency to that of Jem and The Holograms. While the latter band's music generally cover topics such as love, tolerance, understanding and redemption, The Misfits' music typically revolves around ideas of selfishness, superiority and greed. To them, music is about personal success and the self-gratifying rewards it offers.

The fashions for The Misfits were called Smashin' Fashions.

Songs by The Misfits

A Pizzazz doll from Cat-man1990's collection

A Stormer doll from Cat-man1990's collection

A Roxy doll from Cat-man1990's collection

A Jetta doll from Cat-man1990's collection

Retrieved from "https://jem.fandom.com/wiki/The_Misfits?oldid=32606"
Community content is available under CC-BY-SA unless otherwise noted.