The Jem Jam (Part 1) is the twenty-third episode of the first season, and the 23rd episode overall, of the Jem animated series.

The Misfits plot to ruin the "Jem Jam", a benefit concert Jem is planning, by tricking Luna Dark (a Madonna-like singer) into coming with them, while Krissie must deal with Lena Lerner's (a Tina Turner-like pop star) spoiled son, Dominic (who resembles a young Michael Jackson). Meanwhile, Ba Nee is sure that Randy James, a red-haired drummer, is her father.

This episode also featured other characters based on real life celebrities from the era: Roland Owens, who resembles Stevie Wonder; Ron Cox, who resembles Mick Jagger; and Johnny Deacon, who resembles Bruce Springsteen.

Techrat: You wanted gimmicks. You got them.

Jem: This is by invitation only.
Pizzazz: So, we invited ourselves.

(As thugs trash the place)
Pizzazz: You sure have some creepy friends, Jem.
Jem: They're no friends of mine.

Pizzazz: What a dumb idea, Eric?
Eric: Everybody is talking about the Jem Jam. But this will grab their attention.
Pizzazz: A bunch of stupid balloons.
Roxy: You've gone soft in the head, Eric!

Ashley: Ba Nee, why'd you run away?
Ba Nee: That lady said my father was here.
Ashley: But you don't have a father.
Ba Nee: I do too! He's an American with red hair. My mother told me so.
Ashley: But that's all you know. That lady was playing a mean trick.
Ba Nee: I will find my father someday. I will. 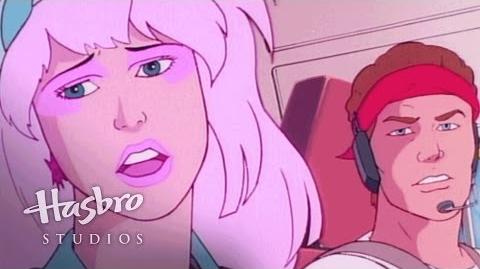 Jem and the Holograms - Helicopter Trouble!
Add a photo to this gallery

Retrieved from "https://jem.fandom.com/wiki/The_Jem_Jam_(Part_1)?oldid=32024"
Community content is available under CC-BY-SA unless otherwise noted.