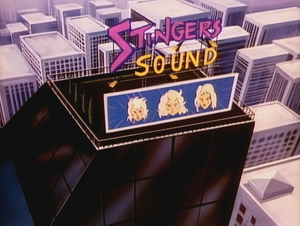 Stingers Sound is the name of the record company that both The Stingers and The Misfits are signed to.

When the new sensation band, The Stingers, arrived to L.A., Starlight Music's CEO, Jerrica Benton, was very interested in getting them to sign for her record company. However, rival executive, Eric Raymond, from Misfits Music, had the same idea and this turned into a dispute between the two of them to see who could make The Stingers sign for their respective company.

Jerrica offered them a record deal with Starlight Music, but Eric, determined to get them at all costs, sold half of his own label, Misfits Music, which was originally owned by Harvey Gabor. Jerrica then stepped back from the offer and that's when Riot decided to close the deal with Raymond, which ultimately resulted in Misfits Music being rebranded as "Stingers Sound".

The two major music bands signed to Stingers Sound are The Stingers and The Misfits, the latter as they were already signed to the original label. Surprisingly, Pizzazz didn't display any opposition to the idea, although this was probably due to her interest in Riot.

Once The Stingers got control of Stingers Sound, Eric Raymond was rarely seen.

Stingers Sound has many of the same interior departments and offices that were in place before the arrival of The Stingers. In addition, it had new offices installed. These include:

Outside view at night. The building is erected across the street from Starlight Music.

The roof has a garden and a fountain. Parties are usually thrown here.

Conference room.
Add a photo to this gallery

Retrieved from "https://jem.fandom.com/wiki/Stingers_Sound?oldid=33079"
Community content is available under CC-BY-SA unless otherwise noted.