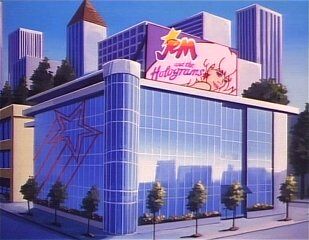 For other uses, see Starlight (disambiguation).

Starlight Music, also known as Starlight Records, is a music record company located in Los Angeles, California, created by Emmett and Jacqui Benton, the parents of Jerrica and Kimber in the mid to late '70s, to finance Jacqui's singing career and the Starlight Foundation, which supports the foster girls of Starlight House.

When Emmett Benton died, he left half the company to his daughters and the other half to Eric Raymond. But when Eric revealed that he wasn't willing to continue supporting the Starlight Foundation, and instead was more interested in making money, he promoted a new girl band: The Misfits. This is when Jerrica's other inheritance from her father, the holographic computer Synergy, reveals itself to her. Jerrica creates her own band, The Holograms, and to avoid a conflict of interests, she creates a new identity for herself, the pink-haired rockstar known as Jem.

This is a very large and impressive building, even if it's only half as tall as Misfits Music. Jerrica has her own office on the top floor and each of the other Holograms appear to have their own office as well. There's also room for recording studios, conference rooms, a workshop for Rio, and more. This is where Raya comes to audition for the talent search.

Jerrica is always torn between all the hard work done at Starlight Music and her singing career as Jem. And even though Eric Raymond now runs Misfits Music across the street, he keeps plotting to take over Starlight Music again.

The building also appears in the 2015 live-action film, Jem and the Holograms, this time in the form of a whole corporation under the name of Starlight Enterprises, with Starlight Music being a division of such company. The place was presumably founded by Michael Raymond and his wife and current CEO, Erica Raymond. Since Michael's death, Erica became the sole owner of the company.

The building shares a few similarities with its animated series version counterpart, most noticeable the giant rising

star logo on its facade, although this time around it is decorating the top of the main building, instead of being on its side.

According to Michael's will, his son, Rio, has the right to take over Starlight whenever he feels is ready to take charge. Erica, trying to prevent her son from knowing this, hid the will in a safe at her office, thus claiming the entire company for herself.

Retrieved from "https://jem.fandom.com/wiki/Starlight_Music?oldid=32291"
Community content is available under CC-BY-SA unless otherwise noted.