The Starlight Girls are a group of foster girls living in the Starlight Mansion. Their principal caretakers are the Benton family, along with some employees and associates.

The foster house is mainly benefited by the raisings made by the Starlight Foundation, which was created for this sole purpose. Some of the main sustenance sources the foundation has are from making diverse events to raise money, as well as the profits made by their main benefactor, the rock band Jem and The Holograms.

The main caretakers of the girls are the two surviving Benton sisters, Jerrica and Kimber, along with long time company employee, Mrs. Bailey.

When the series started, the girls initially lived in the Benton's house, properly named Starlight House for Foster Girls. When the house was burned down,[1] the girls were transferred to the Starlight Mansion, where they stay for the rest of the series. From that day onward, the mansion was also known as "Starlight House". 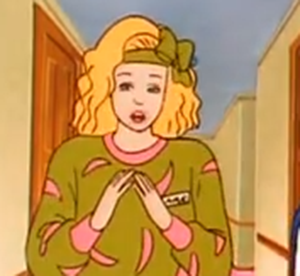 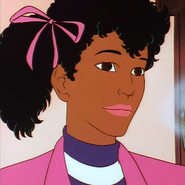 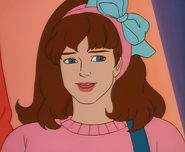 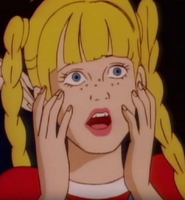 Terri
Add a photo to this gallery

Mrs. Bailey has served as housemother to the Starlight House for an unspecified number of years. A motherly, sensible fixture, she cooks for the girls and tends to their daily needs. She also consults with Jerrica on the management and finances of the house. She is not aware of either Synergy or Jerrica's secret identity as Jem.

Retrieved from "https://jem.fandom.com/wiki/Starlight_Girls?oldid=32329"
Community content is available under CC-BY-SA unless otherwise noted.