Starbright (Part 3): Rising Star is the eighth episode of the first season, and the 8th episode overall, of the Jem animated series.

During a dangerous motorcycle scene for the movie, Kimber is caught in the middle of a series of explosions set off by Roxy and Clash and is nearly killed. Infuriated, Jem and the Holograms quit the movie permanently, along with most of the crew who witnessed the accident and Eric's way of looking the other way.

Jem rallies the crew (who all agree to offer their services for free) to continue the movie, but with a new plot and title: Starbright, while The Misfits' demanding behavior finally causes what remains of the original crew to walk off the set in favor of the other film. Meanwhile, a disguised Clash sneaks onto the set of Starbright to spy on the cast and crew, only to be exposed by Georgia, the makeup artist who had recently quit the movie as well.

Clash steals the tape of Jem's accident along with some of the costumes and equipment, but Jem and the cast manage to recover it after a lengthy car chase. They then take the tape to the various entertainment unions, who shut down production of The Misfits' movie and sue Eric for their numerous misconducts, such as Eric's directing a film without the Directors' Guild approval, the hazardous conditions of the set, and his failure to use qualified stunt doubles. When Pizzazz's father learns how overbudgeted the film has gone and about all the fines he has to pay because of the lawsuits, he names Howard Sands as the manager of the studio. Starbright proves to be a box office smash, while The Misfits' movie bombs quickly. The Holograms' first share in the box office proceeds go to pay for Ba Nee's eye surgery, which is a complete success. In the end, Jerrica takes Ba Nee to see the movie along with the rest of the Starlight Girls, who says it's the best she's ever seen. 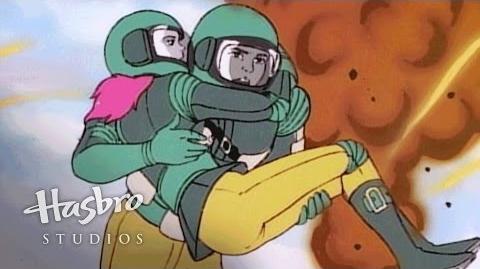 Retrieved from "https://jem.fandom.com/wiki/Starbright_(Part_3):_Rising_Star?oldid=33139"
Community content is available under CC-BY-SA unless otherwise noted.