Starbright (Part 1): Falling Star is the sixth episode of the first season, and the 6th episode overall, of the Jem animated series.

Jem stars in Howard Sands' new movie, part of the prize she and The Holograms won in the Battle of the Bands. But Pizzazz convinces her father to buy the movie studio making the film and give ownership to Eric Raymond, who quickly seizes control of the film and includes The Misfits to the cast. Eric places the focus of the film on the Misfits and Jem and the Holograms are relegated to supporting roles. Jerrica, in return, is forced to serve as Eric's assistant.

Finally fed up with The Misfits' disruptive behavior, Jem and the Holograms, along with Video, quit the movie. Meanwhile, Jerrica receives shocking news about Ba Nee, who has been diagnosed with a rare, optical condition that will leave her blind within a matter of weeks or months.

From this episode and on, the main characters' original outfits (as well as their faces somewhat) were changed to better resemble the Hasbro dolls and even the animation improved quite a bit to resemble the show's intro. Main changes included: 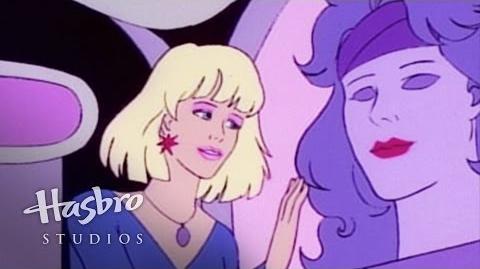 Retrieved from "https://jem.fandom.com/wiki/Starbright_(Part_1):_Falling_Star?oldid=33141"
Community content is available under CC-BY-SA unless otherwise noted.