Samantha Newark (born June 27th, 1967) is a British-born American singer-songwriter and voice actress best known for her iconic voiceover work as the speaking voice of Jem and Jerrica in the animated cartoon series, Jem.

As a teenager, Sam became a sought-after voiceover talent in mainstream television. Her work on Jem and voiceover roles on the original The Transformers cartoon as the voices of Ariel, Elise Presser and the Zamojin Empress, thrust her into a type of international fame that has produced a serious cult following that persists to this day.

She lent her voice talent to many radio and TV projects while writing and performing her original music as a solo recording artist in Los Angeles, Nashville and Dallas.

Samantha landed a featured cameo role on the live-action feature film adaptation Jem and the Holograms, directed by Jon M. Chu, and is currently working on an upcoming third album.

Newark is best known for her voiceover work on the animated 1980s cartoon series, Jem, as the speaking voice of Jerrica/Jem (Britta Phillips provided the singing voice). She was nominated for a "Young Artist Award" twice for "Exceptional young actress in animation, series, specials or film features" and "Best animated series". Other voiceover credits include guest-starring on the original The Transformers cartoon as Ariel in the classic episode "War Dawn" and in other episodes playing the roles of Elise Presser and the Zamojin Empress.

Samantha was also cast as the voice of a young Peter Pan's mother in Steven Spielberg's feature film Hook, as well as doing countless on camera and voiceover TV and radio commercials. She was cast in the PlayStation game Britney's Dance Beat playing the roles of the choreographer and the Asian dancer. She also played the role of Debbie in the horror film Summer Camp Nightmare.

In 2012 she was invited to contribute with two characters to the festival favorite animated short Pound Dogs, created by Mike Salva. This project won the MTV's "Voice and vision animation award" for writing and animation and garnered two development deals with MTV.

Jem remains her most well-known role and Newark herself is invited to meet fans at many conventions all over the world.

In 2015, Sam had a brief cameo in the live-action film, Jem and the Holograms, in which she played the role of a hair stylist working at the Astral Recordings studio. This marked her return to the same franchise that helped push her voiceover and music career onward more than 30 years ago.

Samantha Newark began her professional music career at the age of 7. Signed to Nitty Gritty records, she recorded her first record while living in Africa and then toured to support her single "Jimmy Jimbo". At age 10, she and her family immigrated to America and Samantha was promptly signed to International Creative Management, where she was thrust onto the state fair circuit opening for Eddie Rabbitt, Pat and Debbie Boone and Mac Davis. She was cast as the precocious redhead in the United States Navy band production of the musical Annie in Washington, DC, and eventually moved with her family to Burbank, California, where she played Rosie in a production of Sweet Charity and Dorothy in a Los Angeles production of The Wizard of Oz. She was a frequent performer of the L.A. Kids cabaret and performed often with the Ray Anthony orchestra at the famous Shrine Auditorium and on many telethons. She also was a featured guest vocalist at age 14 with the 65-piece Los Angeles Pops orchestra.

She sang the theme song for the anime classic film Project AKO. She was also hired to sing multiple songs on the soundtrack for the movie Crazy Six.

She won the Los Angeles vocal competition at the age of 17 and then through the late '90s started to write and record her own original music with many different incarnations of original bands.

She was one of the twenty finalists out of a staggering 10,000 submissions for the Lilith Fair talent contest sponsored by Star 98.7 radio and Universal in 1999 and was one of fifteen budding songwriters accepted into the coveted Lester Sill Ascap songwriting workshop, where she met writer-producer and long time collaborator composer Mike Reagan. She and Mike worked together through the late 1990s' writing original music, performing live and contributing vocals for various PlayStation games. She sang vocals on the movie soundtrack Some Girl, starring Juliette Lewis and also sang vocals in the movie Material Girls.

She has worked in the EDM world, co-writing a song called "Deeper" for the German group Fragma.

In late 2006, she auditioned to be a backup singer for renowned poet laureate, Leonard Cohen. The project was set to do a world tour but after two months of rehearsals, it was canceled and put on hold for two years, where it started up again with a new music director and a new team.

Samantha made her move to Nashville, Tennessee, in October 2007. She released her self-titled debut album in 2008. Songs from the album have been featured in numerous television programs, including Smallville, Reba, Life Is Wild, Gossip Girl, America's Next Top Model, as well as MTV's Laguna Beach, Punk'd and My Super Sweet 16.

In 2008, Samantha was invited to be a part of the documentary film Saravia, about the spiritual journey into the life of painter, writer and composer Mauricio Saravia. Samantha and Mauricio met in Los Angeles and worked closely together on the soundtrack for the film. Samantha composed the melodies for Mauricio's poetry which was featured throughout the film and performed one of the songs live in the movie. Mauricio died after suffering an illness shortly after filming.

Samantha released her second album, Somethin' Good, in late October, 2011. A stylish and glittery synth/pop/electronica-influenced record. Songs written and performed by Samantha and produced by Dave Polich, Michael Jackson's keyboard programmer on the "This Is It" concerts.

...and Jem in the animated series.
Add a photo to this gallery

Samantha as the Astral Recordings' hair stylist in the Jem and the Holograms film. 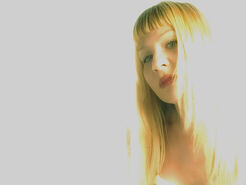 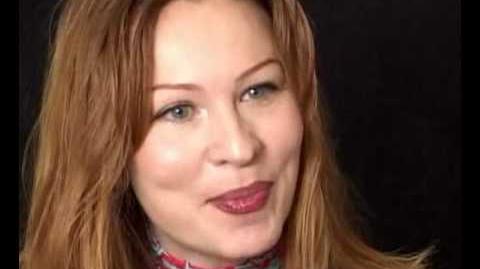 Jem (DVD) - Samantha Newark - 01
Samantha Newark's interview from the Jem seasons 1 and 2 DVD release.
Add a photo to this gallery

Retrieved from "https://jem.fandom.com/wiki/Samantha_Newark?oldid=31969"
Community content is available under CC-BY-SA unless otherwise noted.