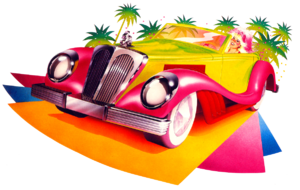 The Rockin' Roadster, also known simply as the Roadster, is an old-fashioned car and primary form of transportation for Jem and The Holograms. It was first discovered in the first episode at an old drive-in purchased by Emmett Benton and, like the rest of the company, it was a gift to his daughters before passing away.

The original Roadster is portrayed as an open, four-seated car with a traditional design, having a 1900s appearance. On its debut, the body of the car was a lemon-yellow with hot-pink, full-bodied wings and thick, whitewall tires. During the Glitter 'n Gold era, the style of the Roadster remained, with only the body color changed to white and the wings with a lighter pink coloring.

The Glitter 'n Gold Roadster is a golden version of the Rockin' Roadster owned by Jem and The Holograms. It was being given away as a prize during the episode Glitter and Gold.

Not much is known about this vehicle, but when it was being displayed as a prize during a band contest, both The Misfits and The Holograms desired to win it. When the final day of the contest came, both bands had sold half a million albums and the next album to sell would decide the winning band. In the end, it was The Holograms that won the contest and the vehicle, leaving Pizzazz to throw a fit over losing.

Rockin' Roadster toy with the original lemon and pink design.
Add a photo to this gallery
Glitter 'n Gold Roadster

Glitter 'n Gold Roadster from the Glitter and Gold episode.

Retrieved from "https://jem.fandom.com/wiki/Rockin%27_Roadster?oldid=32224"
Community content is available under CC-BY-SA unless otherwise noted.