Ingrid Kruger, better known by her stage name, Minx, is a German musician and performer. She plays the synthesizer and provides backup vocals for The Stingers. Like her bandmates, Minx is arrogant and only interested in herself, but will take orders and advice from the charismatic Riot, as she knows he is a man with a future and she wants to be there when it happens.

Ingrid grew up in Berlin, Germany with her mother, a secretary, and her father, a computer repair man. She has been fascinated with music and technology since she was very young. She first met Riot when they were together in a band called Nirvana in Germany, but soon Riot decided to leave the band to make his own way in the music business world. Ingrid joined this journey along with Riot, and ever since then they have been really close.

Minx is also very technologically-minded and can work wonders with any computer or synthesizer. The only other person who she shows any genuine affiliation toward is Techrat, due to his similar interest in technology. Her romantic interest in the show is Rio, whom she teases, seduces and flirts with, despite his constant rejections. She sees him as a challenge because, as she says, she can usually have any man she wants and relishes the prospect of stealing him from both Jerrica and Jem.

In the episode A Change of Heart, she suffered a near death experience when she almost drowned in the ocean. This prompted her to improve herself and thus became sweet and dedicated to her "new friends". Riot and Rapture did not adjust well to this new outlook, although it was short-lived. Soon enough, Minx realized she didn't have to change or be the "goodie" of the group.

Minx and Rapture are friends due to their understanding of each other and go along with each other's acts. For example, Minx always covers up Rapture's lies and Rapture always supports Minx when she is determined to get something or 'hook' someone. 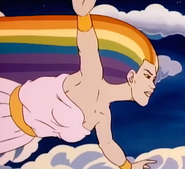 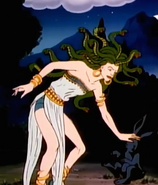 Minx portraying Persephone
Add a photo to this gallery

Minx doll by Integrity Toys
Add a photo to this gallery

Retrieved from "https://jem.fandom.com/wiki/Minx?oldid=32507"
Community content is available under CC-BY-SA unless otherwise noted.