Lindsey Pierce, better known by her media name, "Lin-Z", has her own rock video TV-show on VTV and Lin-Z TV, where she hosts music videos and reports the latest music news. Jem and The Holograms are friends and frequent guests, but even The Misfits appear at times, although not as often due to their antics.

Lindsey knows a lot about the music business and helped Jem and The Holograms a lot in their earlier years by introducing them to film and music video director, Anthony Julian. It's probably guessing that she has had her show for a while; Jem has mentioned that she has seen her rock video show lots of times.[1]

Lin-Z usually has permed hair and dresses in an orange outfit. She can commonly be seen wearing green earrings, green stockings and orange boots, although she also wears other different outfits throughout the series.

In the early concept of the series, she wore a blue pantsuit and fashioned a different hairstyle. Even though her image changed, her doll remained with that same look.

It seems that Lindsey and Anthony were already good friends before the series started. Because of her positive personality, she easily befriends anyone that comes in contact with her. She was introduced to Jem and The Holograms while traveling on Countess Du Voisin's yacht, whom she also seems to be friends with.

Lindsey Pierce also makes an appearance in the 2015 live-action film, Jem and the Holograms. This time around, she is Rolling Stone magazine's head editor and is played by none other than Christy Marx herself, creator of Jem.

She appears at the night of the concert and introduces herself to Rio among a cheering crowd, remarking how he's got something special going on with this new all-girls band he's now managing. She offers to have them on the next cover, to which he gladly accepts. When she asks him how would they like to call the band, Rio looks at Synergy playfully projecting some holograms in the air and responds: "How about Jem and The Holograms?". She agrees to the name. 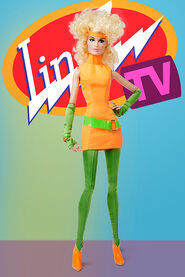 Lindsey Pierce was portrayed by Jem creator Christy Marx in the 2015 film.

Community content is available under CC-BY-SA unless otherwise noted.
Advertisement