Last Resorts is the eleventh episode of the first season, and the 11th episode overall, of the Jem animated series.

Jem and The Holograms take a much-needed vacation to a Colorado ski resort owned by Rick Franklin, an old friend of Howard Sands. Mr. Franklin tells the Holograms that his resort is being threatened by another resort owned by Eric Raymond. Eric and the Misfits attempt to sabotage the resort in order to bankrupt Franklin so that he will sell it to Eric. Meanwhile, Rio and Swensen, a handsome ski instructor, face off in a contest for Jem's attentions. In order to settle the matter of which resort controls the mountain, the Holograms and the Misfits face off in a ski contest.

Jem and the Holograms - Jem is Attacked By a Bear!-0 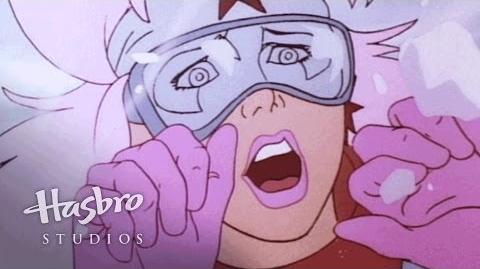 Jem and the Holograms - Avalanche!
Add a photo to this gallery

Retrieved from "https://jem.fandom.com/wiki/Last_Resorts?oldid=31637"
Community content is available under CC-BY-SA unless otherwise noted.