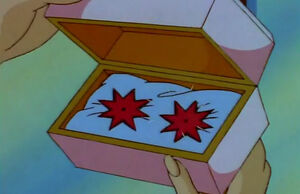 The Jemstar Earrings[1] are the two crimson-colored, seven-pointed star-shaped earrings worn by Jerrica Benton and, by extension, her alter ego, Jem. While they may appear like just a pair of ordinary accessories, in reality, they are two powerful, electronic projectors capable of creating life-like holograms in almost any environment.

Shortly after the completion of Synergy, Emmett Benton created the Jemstar Earrings for his eldest daughter, Jerrica. He thought he would be able to give them to her himself, but unfortunately, he passed away before he could do so. Sometime after his passing, the earrings made their way to Jerrica as part of Emmett's will. She then proceeded to put them on and it was then when she and her friends were introduced to Synergy, who explained her presence and what Jerrica's father was working on before he died. When Jerrica decided they should form a band to save the Starlight Foundation and Starlight House, she used Synergy and her star earrings to create the Jem alias as a cover to compete in many music festivals and tours.

During one fiasco, Jerrica's Jem alias was almost blown when she needed to go through a metal detector and refused to take off the earrings. Fortunately, she was able to save herself with the aid of an influential Chinese fan who happened to pass by. It was through this event that The Misfits, along with Eric, suspected there was a reason to why Jem never took them off, thinking they were some sort of lucky charms; thus they decided to steal them, causing The Holograms to search all over Beijing and eventually find them in the possession of another Holograms' fan, a little Chinese girl named Lin, who gave them back as a present (without knowing their true powers and without The Holograms realizing they were the real ones at first) just in time to perform for an increasingly impatient audience.

To this very day, Jerrica can almost always be seen wearing the earrings and very rarely does she take them off.

The earrings also make an appearance in the full length feature film, Jem and the Holograms (2015). Similar to their animated series counterparts, they were given to Jerrica by her father before he died and are also star-shaped.

There's where the similarities end, however, as this time around they are only four-pointed, transparent and pink-colored. Additionally, they are now part of Synergy's missing pieces, being in fact two parts of the very same device which can be assembled by uniting both of them. The final piece can then be inserted into Synergy's body, allowing it to uncover more of Jerrica's past. In this case, it was her father's final message to her.

Jerrica about to transform.

Jem with her star earrings as she performs.

A satellite glitch interrupts the earring's holographic projections.
(In Stitches)
Add a photo to this gallery

Aja returns her earrings back to Jerrica.

Retrieved from "https://jem.fandom.com/wiki/Jemstar_Earrings?oldid=29895"
Community content is available under CC-BY-SA unless otherwise noted.