For other uses, see Jem and The Holograms (disambiguation).

Jem and The Holograms

The Battle of the Bands

Jem and The Holograms, or simply The Holograms, is an American rock band formed in Los Angeles, California. Their executive producer is Jerrica Benton, co-owner of Starlight Music, a record company to which the band is signed under, and their road manager is Rio Pacheco. Jerrica does not only take care of the band's business affairs, though, and she's in fact their main vocalist, who performs under the secret identity of Jem.

The band's four founders are siblings Jerrica and Kimber Benton, and foster sisters Aja Leith and Shana Elmsford. The fifth member is Raya (Carmen Alonso), who joined later in the band's career.

The band derives its name from the main concept of the show, which are the holographic images projected from Synergy, a supercomputer built by Jerrica's father, via her earrings. These earrings have remote micro-projectors in them, allowing Jerrica to assume the persona of her alter ego, Jem. She can also project images around her, which she uses in many cases as a distraction if her cover is about to be blown or to protect herself and her friends from danger.

The band has made much progress throughout the series, starting with their formation in the first episode, and would often reach the top of the charts. All of the band members are close friends, with Kimber Benton being Jem's sister, although the band has been separated a few times. Examples include: The Day the Music Died and The Bands Break Up.

Unlike the style of The Misfits or The Stingers, who mainly focus on topics such as self-indulgence and greediness, Jem and The Holograms' style deals with themes such as love, tolerance, understanding and redemption.

Despite being rock and ballads the main focus of their songs, they are known to frequently venture into a wide variety of other music styles as a result of their exciting adventures. These range from classic styles such as from rock and roll or jazz, to the more modern hard rock, pop rock, and new wave. 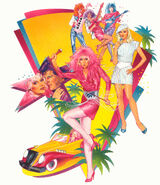 Artwork of Jem and The Holograms.

The title characters with their logo.
Add a photo to this gallery

The Holograms and their road manager, Rio Pacheco.
Add a photo to this gallery

Integrity adult collector dolls and 1986 and 1987 original dolls by Hasbro. 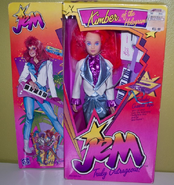 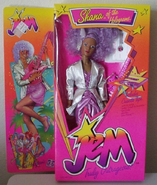 The Holograms from the film adaptation.
Add a photo to this gallery

Retrieved from "https://jem.fandom.com/wiki/Jem_and_The_Holograms?oldid=32499"
Community content is available under CC-BY-SA unless otherwise noted.