Lead vocalist of The Holograms

Jem is her name, no one else is the same, which is true in some ways, but not so much in others, as she's none other than the alter ego of Starlight Records executive Jerrica Benton. Only a few people know her secret, including the rest of her bandmates, The Holograms.

Jem is portrayed as a beautiful, calm and mature woman, but there are times when she gets stressed out and upset, features she doesn't usually manifest when she appears as Jerrica. One example being in the episode The Day the Music Died. Jem, like Jerrica, doesn't mind that each other becomes romantic with Rio, as they are both the same person. However, when Jem first had contact with Rio, she tried to get him to like her without telling him that in fact she was Jerrica in a hologram. There are also times where Rio can get very furious at Jem when he thinks that she loves another guy or when Jem won't tell Rio who she really is. As the story progresses, Jerrica develops a fear that Rio will leave her if he finds out she's been lying to him about her secret identity all this time.

Jem exudes an air of glamour and sophistication, but is very down-to-earth and has the greatest of love and respect for her fans. Jem also has a charisma that can make anyone respect her right away. Everyone is attracted to Jem and she was able to charm Rio into loving her almost instantly. Nick Mann also fell in love for her while filming a movie in the episode Starbright (Part 1): Falling Star. Riot also fell in love for her at first sight, and, with his charm, almost made her fall in love with him, too, but no matter what, her heart will always belongs to Rio.

Jem is very loyal and will do anything in order to stop The Misfits and The Stingers from accomplishing their various, evil schemes. It's possible that Jem might have a crush in Riot because of his charm, but in other episodes, she sees him as a rival, similarly as she does with the Misfits. She will also do anything in order to help someone out, like doing charity work or raising money for Ba Nee's eye operation, but, peculiarly, she isn't quite as hard working as when she's Jerrica. She's always willing to forgive others, such as when she agreed to end the rivalry with the Misfits. 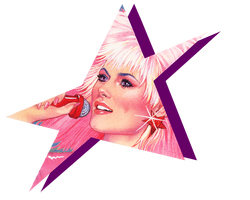 Shortly after her father's death, Jerrica mysteriously received her red Jemstar Earrings. These earrings were a small part of a large secret that her father had been working on before he died, and who subsequently left them for Jerrica. They allow her to communicate with the supercomputer/synthesizer Synergy, which in turn allows her to assume the holographic identity of Jem, the famous rockstar.

Along with her friends, she engages in several adventures, often against rival band, The Misfits and their manager, Eric Raymond, and tries to stop them from wreaking havoc. Along with having an alter ego, she's afraid to tell people who she really is because they might try to use her secret identity against her and hurt the people she loves. She never told Rio her secret in the series, as she's afraid Rio would probably leave her, but whenever she tries to get a chance to come clean, something bad always happens. Still, she made a lot of friends besides the Holograms: Danielle Du Voisin, Howard Sands, Anthony Julian, Video, Jeff Wright, Danse, Astral Eldrich and Sean. Jem will always find a way in order to succeed in defeating the Misfits or the Stingers.

Jem carries a very slender physique. She has hot pink hair, lavender eyes, rosy cheeks, fair skin, pink lips, pink eye shadow, black eyebrows, and matching eyelashes. She wears a lot of outfits throughout the series, but her favorite is her iconic pink dress, which she wears frequently. This outfit consists of a dark pink dress with a diagonally cut hem and a long V-cut neckline that shows her breast cleavage, a white leather belt with a silver sparkly layer, a blue screened decoration over the top, and very fine numbers of silver tassels, clear or light pink stockings, dark pink pumps, and a silver bracelet on her left wrist with a pink stone on it. Regardless of what she's dressed in, she always wears a pair of "magical" crimson star earrings, which Synergy uses to project her illusory outfits. She also used to have a red belt and a little bit of tannish skin in the early concept of the series.

Retrieved from "https://jem.fandom.com/wiki/Jem?oldid=33038"
Community content is available under CC-BY-SA unless otherwise noted.