In Stitches is the twelfth episode of the first season, and the 12th episode overall, of the Jem animated series.

Several girl groups from all over the world are invited to take part in a rock fashion contest headed by Italian music promoter, Tony Cassini. Shana is a bit nervous about the competition and The Misfits try to rattle her by chipping away at her confidence. The last laugh is on them, though, when their own designer drops out of the contest. Unfortunately, this prompts them to get Zipper, Eric's hired henchman, to steal the costumes Shana designed for The Holograms. Fortunately, the designs he stole were actually made by Ashley.

Even when they're able to recover Shana's designs (which get ruined while escaping), the seamstresses hired by Eric are able to recreate them, this time dyed in black, following Pizzazz's suggestion. Shana is able to design new costumes for the Holograms, and with Synergy's help, use holograms to create the costumes. In the end, Jem and the Holograms win the first and second place, as Shana is also credited for the designs the Misfits stole. 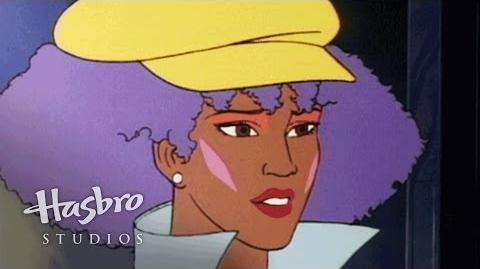 Retrieved from "https://jem.fandom.com/wiki/In_Stitches?oldid=32011"
Community content is available under CC-BY-SA unless otherwise noted.