Howard E. Sands is a film producer and the owner of World Studios.

Howard Sands is a wealthy businessman who engages in acts of charity and entrepreneurship. He's also a film producer and owns World Studios, the same studios hired to film movies like Starbright and Hollywood Jem, where he worked with Jem, Kimber, Aja, Shana, Rio, Nick, Jeff and Sean. He has donated his own money to help finance several film and television productions, as well as helping to support various foundations. He is even good friends with the Holograms. In fact, he is such goods friends with them that he even helped Jerrica out by letting them stay at the new mansion when Starlight House burned down.

Howard has brown hair and has a thick mustache. He dresses like a typical businessman, with a gray suit and a blue necktie.

Howard is generally seen as a friend to Jem and the Holograms, especially when he let them stay at the mansion when Starlight House burned down, and also often providing them with a place to stay if necessary. He is a fair businessman, however, as he offers the Misfits the same opportunity to win the Starlight Mansion as the Holograms. Once the Holograms won the mansion fairly, he remains a close friend and acquaintance. He has shown a close familiarity with Countess Danielle Du Voisin, although it is unclear if his feelings for her go beyond than just being old friends. 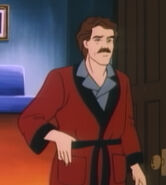 Howard in his smoking jacket
Add a photo to this gallery

Retrieved from "https://jem.fandom.com/wiki/Howard_Sands?oldid=31921"
Community content is available under CC-BY-SA unless otherwise noted.