Eric Raymond is a recurring character in the Jem animated series. He is Jerrica Benton's business rival, who is always plotting on new ways to get his hands on Starlight Music. He is the manager and main sponsor of the Misfits, and the main villain in the series.

Eric Raymond was formerly Emmett Benton's main assistant until his death, where he then became the CEO of Starlight Music, sharing the company with Jerrica. He was not going to share his half, though, as he was planning to make it the biggest company in the country. Disliking her and her approach to music, he brought in his own band, The Misfits, preferring their edgier sound and style. He managed them under the label of Misfits Music, founded and owned by Harvey Gabor, Pizzazz's father, until Eric purchased it after selling all of his possessions.

Eric constantly tried various schemes to take down Jem and The Holograms, but each of them failed when they were foiled by either Jem or her friends and acquaintances. He eventually submitted and gave the complete rights back to Jerrica.

However, at one point during the series, Pizzazz was able to take control over Starlight and the foundation while Jerrica was on a vacation break with Riot. Not happy with the new administration, the Starlight Girls deliberately started to torment Pizzazz with their pranks. Seeing this, Eric quickly offered to buy the company from her. The "hostilities" then turned against him too, with Ba Nee asking him if he would take her to the circus whilst blowing bubble gum in his face. This finally convinced him to withdraw his offer and, as Pizzazz stormed out of the building, so did Eric.[1]

Eric typically wears a gray suit with a red tie, fitting his businessman image. His hairstyle has two cowlicks that resemble devil horns, alluding to his villainous nature.

Eric is portrayed as a shrewd business man who is in the music industry purely for the financial gain. He formerly worked for Emmett Benton, Jerrica and Kimber's father and the founder of Starlight Music, but following Emmet's death in the pilot episode, Eric wanted to gain full control of the company. He constantly tries to outsmart Jerrica, but always underestimates her abilities. As a result, his plans generally backfire.

Eric has proven to be quite ruthless at times in his bid to defeat his rivals, going as far as burning Jerrica's late mother's recordings, which earned him a slap in the face from Jerrica as a consequence. Eric is also easily stressed, increasingly more so with each consecutive failure. He is also not above violence, having once slapped Jerrica, only to be punched by Rio in return.

Eric hired a variety of thugs, creeps and other criminally-minded individuals to do his dirty work. 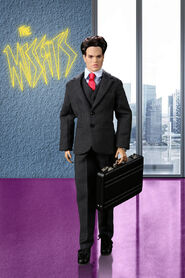 Eric doll by Integrity Toys
Add a photo to this gallery

Retrieved from "https://jem.fandom.com/wiki/Eric_Raymond?oldid=32098"
Community content is available under CC-BY-SA unless otherwise noted.