Broadway Magic is the sixteenth episode of the first season, and the 16th episode overall, of the Jem animated series.

The Holograms and The Misfits have the chance to become Broadway stars now that famous producer, Bob Merrit, is holding auditions for his newest musical. To give the Misfits the upper hand, Eric announces on live television that he'll give a $100,000 reward to anybody who can provide him with Jem's real name. This announcement causes Jem and the Holograms to be mobbed constantly by reporters, a conman, and a gypsy called Mama Pama Bama, during their stay in New York. To Jerrica's surprise, Rio is among those people who are willing to go to extremes to learn the truth about Jem. After Pizzazz deliberately locks Jem up in the crown of the Statue of Liberty, Jem gets rescued by two construction workers and then scares the one construction worker who's after Jem's secret identity. After throwing him the ring buoy, Jem gets transportation from a very fast taxicab driver they encountered on the way to Hotel Americana earlier, only she stops at a parade. Jem then borrows a skateboard from a boy, gets chased by some men in the subway, then gets a hang-glider from a man, and makes it down to the show in time. In the end, Jem would rather let her music, not her secret identity, matter more to the people. 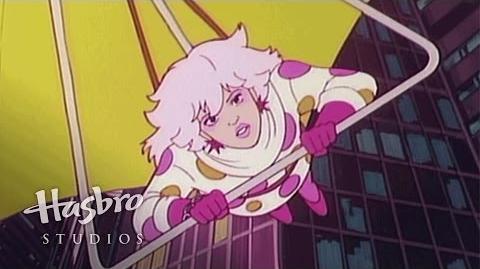 Retrieved from "https://jem.fandom.com/wiki/Broadway_Magic?oldid=32001"
Community content is available under CC-BY-SA unless otherwise noted.